What is the Cost of Living in Dayton, Ohio? Are you thinking about moving to the Dayton area? Like any smart homebuyer, you’re likely wondering about the cost of living in Dayton, Ohio compared to where you live now. We’ve got good news: Dayton is one of the most affordable cities in Ohio and the United States.

At the same time, it offers some of the best career opportunities, neighborhoods, outdoor green spaces, and community atmospheres you could ask for in a big city!

In this article, we’ll take a look at what it really means to evaluate your cost of living, then dive into cost of living scores for the Dayton metro and some of its most popular suburbs.

What does cost of living mean?

Cost of living is the amount of money you need to maintain a particular lifestyle in a specific place. It takes into account every kind of necessary living expense: mortgage or rent, groceries, taxes, transportation, education, healthcare, entertainment and more.

Cost of living calculations are based heavily on how income levels compare to the cost of goods, services, and housing in that location. Average income, even for the very same job, varies by city and state. For example: the median salary for a public school teacher in Los Angeles, California is $68, 625. Someone with the same position in Birmingham, Alabama earns a median salary of $57, 449. This disparity indicates a difference in the cost of living.

While they might use different methods, these indexes generally agree on the areas that are more and less affordable across the United States. The Missouri Economic Research and Information Center created a color-coded map where you can easily see how cost of living affordability shakes out throughout the country: 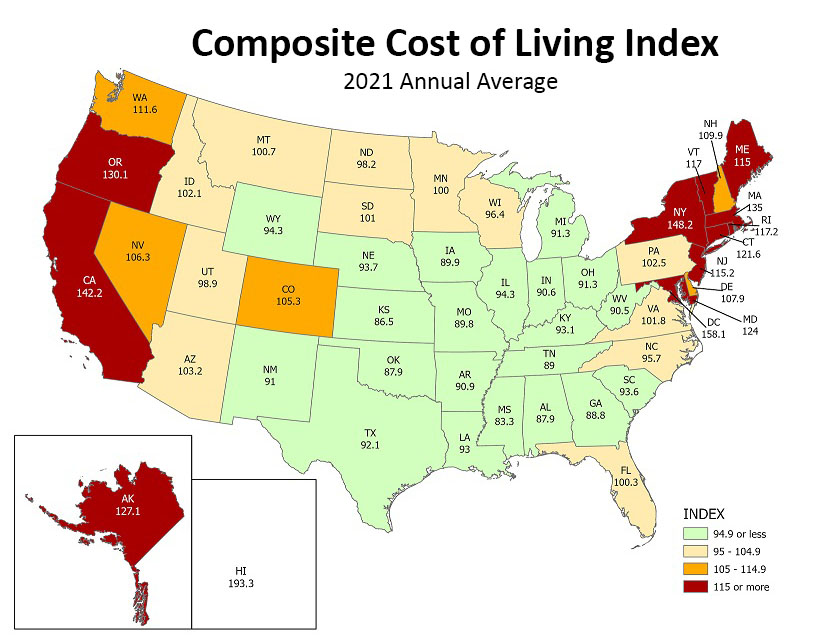 In most cases, the national average cost of living is assigned the number 100, and cities are scored based on their comparison to that number.

What is the cost of living in Dayton, Ohio?

Dayton’s affordability is what makes it such an attractive place to live and work, especially given the many top careers it offers, particularly in areas like healthcare and technology, and at the Wright-Patterson Air Force Base (Ohio’s largest single-site employer). Dayton has recently been named the #1 city in the country for rising tech talent and is home to two of the area’s largest healthcare systems: Kettering Health and Premier Health. 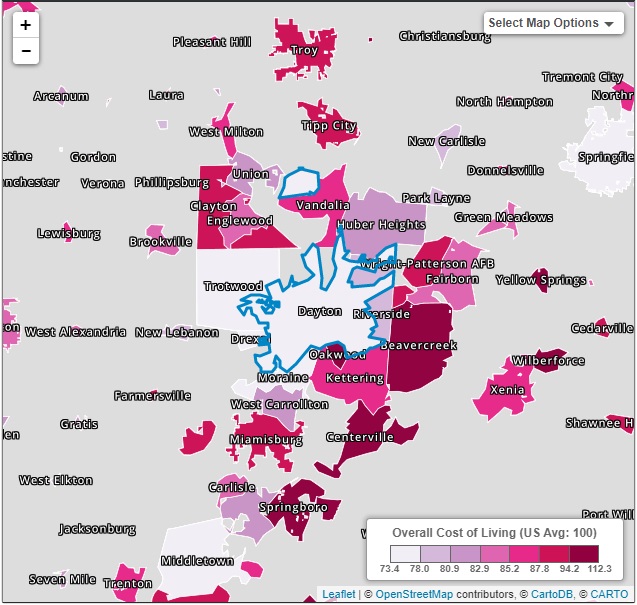 Let’s focus in on some of the most popular areas in and near Dayton to see what the cost of living is like in each.

Dayton Metro has the lowest cost of living index score on the map, primarily thanks to the range of neighborhoods within the metro area. While areas like Downtown Dayton, the Oregon District, and Pheasant Hill will have above average costs of living, neighborhoods like South Park are still desirable but more affordable.

Check out our guide to Dayton’s neighborhoods to learn more about some of the most popular places to live in Dayton metro.

Oakwood and Centerville are two of the most established and desirable suburbs in the Dayton area. Both come with a higher cost of living than the metro area, but this higher cost comes with numerous benefits that make it worthwhile. Both areas also boast school districts among the best in the state (especially Oakwood, which consistently ranks in the top 20 school districts in Ohio).

In both Oakwood and Centerville, homes are generally bigger and most have plenty of outdoor space as well. Rather than the hustle and bustle of the big city, you’ll find quieter residential streets. At the same time, there’s easy and quick access to amenities like restaurants, shopping, coffee shops, bars, and more. For professionals working in Dayton but raising their families in the suburbs, the commute is a quick 15-minute drive. It’s the best of both worlds!

Like Oakwood and Centerville, Beavercreek offers the convenience of being close to the city while offering the slower lifestyle provided by suburban living. Beavercreek has a slightly lower cost of living than the aforementioned suburbs, mainly because it’s considered more up-and-coming than long-established.

For newcomers to the Dayton area or anyone looking for a change, Beavercreek is a really great choice. In the area you’ll find tree-lined neighborhood streets, 20+ parks and playgrounds, and The Green Towne Center, a retail hub where residents can live, shop, dine, and enjoy a buzzing community atmosphere.

Bellbrook aligns with Beavercreek as another Dayton suburb with a middle-ground cost of living: higher than Dayton metro overall but lower than its neighbors, Oakwood and Centerville. In Bellbrook you’ll find a tight-knit community feel (its population is just under 8,000 total) but still have plenty to do thanks to its many parks and charming downtown featuring restaurants, bars, and coffee shops. Beavercreek is a perfect place for anyone wanting to enjoy the convenience of being close to Dayton metro with the day-to-day quiet of small-town living.